So, here is the same room from a couple posts back showing how I decorated it for Christmas. 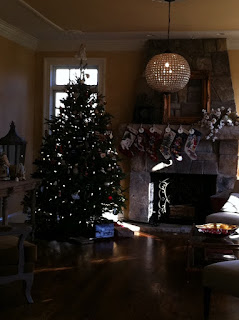 Right after taking down the Autumn decor, I received a shipment from Eloquence, a favorite new vendor. Hop over to their site if you want to see some beautiful furniture, chandeliers and other pieces with a French accent. I left the cottonballs and the pictureless frame and the clock I inherited at Thanksgiving. 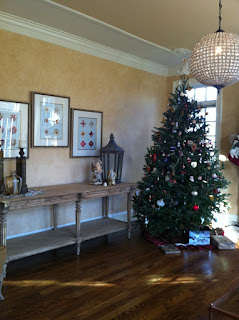 The chandelier that was suppose to be installed in my new office ended up in the living room. It just feels right in there, plus it casts a lovely light at night. 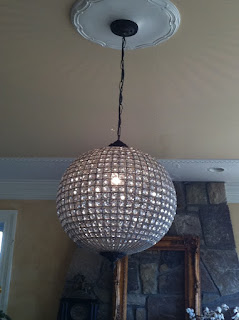 The table, which is a reproduction drapery table, was supposed to go into my bedroom, but I thought if I put it in the living room, that room would at least feel finished until it really IS finished with a rug and draperies. Even though my specialty is window treatments the fact that this is a reproduction DRAPERY table was a happy coincidence. 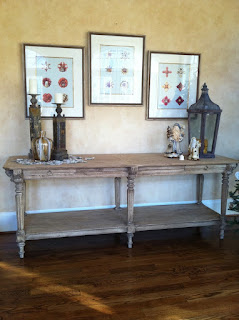 It still feels cavernous to me, so I fill it up with people, every chance I get!
Posted by Toni at 4:25 PM No comments:

Be careful what you wish for, you just might get it.
Or to paraphrase, "Yes, Virginia, there really is a Law of Attraction".

This is a long story, so I've included pictures! 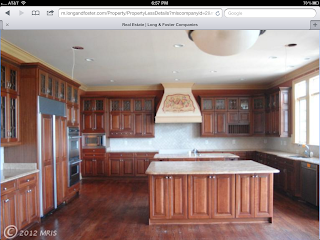 2 islands in the kitchen! It's huge. Notice the missing speakers in the ceiling and NO stove.
﻿
I recently moved, and not just to any old house, but to my Dream House. I have hardly met anyone who would say they live in their dream house, but whenever I tell the story of how I came to own mine, the usual reaction is "Well it was just meant to be!" 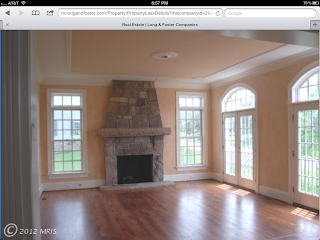 Living Room with stone fireplace﻿
About 8 or 9 years ago I talked my husband into going to look at a model home. It's one of my favorite things to do. We weren't particularly looking to move but I like to fuel my creative juices that way. We went to a particularly beautiful and spacious home and we immediately both fell in love with the house. It had every amenity we had ever, or would ever, dream of! For the next couple of years we revisited that model home every few months, but we could never really afford it and of course, during the real estate boom, the price kept going up. We had read something about visualization and how, to picture yourself with your heart's desire, you should put a photo on your wall. I think I had heard that instead of say, a picture of your favorite car, you should go to the dealership and have someone take a picture of YOU sitting in the car and then look at that picture. So on at least two occasions, we took pictures of each other sitting in various rooms in our dream house. About that time, we dubbed it the Dream CASTLE because it was so large to us. 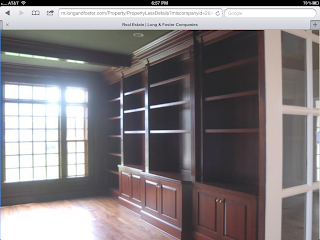 Library with built ins﻿
Well, I, for one, could never get that house out of my head. I would stalk the real estate ads and whenever a house with the same floorplan came on the market, I would go visit it. But the price was always out of reach. I had finally read the book The Secret - apparently the last person on earth to do so and actually didn't see the movie for several more years. But The Secret sounded like so much of the same stuff I was reading anyway and I believed  in the Law of Attraction. I read up on John Assaraf, one of the people featured in The Secret. One of the things I learned from him was something called a Vision Board. Some people call it a photomap. It is basically a piece of paper or cardboard covered with images of the things you want. (John has an interesting and compelling story of his own vision board and dream house.) First I made a little scrapbook with the picture of the Dream Castle on the cover. I got the picture from the real estate brochure.And I also put in the photos we had taken of ourselves in the various rooms of the model home. I  wrote one of my daily affirmations about how much I enjoyed living in the Dream Castle. That was 3 or 4 years ago. 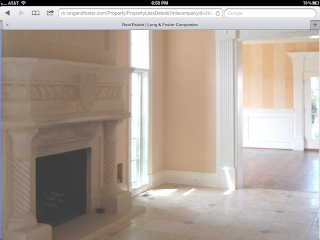 Very castle- like entry room with fireplace (called the Reception Room!)﻿
This past January, we went and looked at a vacation home about 3 hours away. On the drive home, we decided that if we bought a second home, then we would stay put in our current house and would have to let the dream of the Dream Castle go. But something told us not to do it. A week later we were visting yet another model, by the builder of the original Dream Castle. We asked if they would revive that old floor plan in another town and they said yes! We started the 4 month process, that eventually ended in April with our price and the builder's price meeting NOWHERE in the middle. The Universe was just not going to have it. But rather than be disappointed, I just KNEW that something better was going to come along. 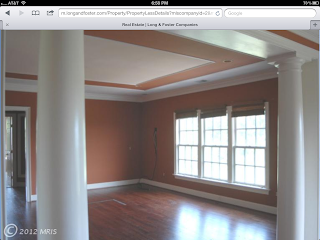 Master Bedroom﻿
Two weeks later, I was on the internet and happened (hm.......happened?) to see that the Dream Castle, the original, the model home, was going into foreclosure and would be auctioned off on the steps of the County Court House. The auction was the next day! My husband and I decided on a price that would be our highest bid and I went to the bank in the morning to get a cashier's check for the deposit. When I got to the auction, which was my first, the opening bid was (gulp!) TWO MILLION DOLLARS!!! Shot down again! But someone at the auction told me that they had heard the house had squatters and they had "stripped" the place and it was nothing like it was. A shadow of it's former self. 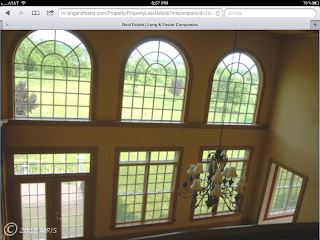 Family Room
﻿
Another two weeks passed and it was my birthday. We were going wine tasting with friends and on the way saw a sign for an estate sale. We decided to follow the signs and stop in. As we pulled up the long driveway and saw the house, I turned to my husband and whispered "It's the same as the Dream Castle". We entered the basement and aside from the wall to wall junk and the 20 or so cats, we could see that they had finished the basement exactly like the Dream Castle model! I was sure that anyone having an estate sale would be putting their house on the market shortly, so I started checking the internet. You are probably thinking that is how I came to get my house, but you would be wrong. 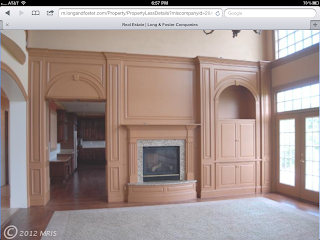 Family Room looking towards kitchen﻿
Another two weeks went by. (The Universe is s-l-o-w to start working on your dreams, but apparently, speeds up at the end.) I was supposed to be working, but instead I thought I'd check my real estate sites to see if anything new had popped up. I typed in what I thought was the address of a house I had recently seen. I keep a little book of houses I want to look at. What I actually typed in (cue music from The Twilight Zone)  was the address from the real estate auction on the Court House steps. The Dream Castle. Up popped a listing, with my beloved picture from my scrapbook and the words, "Just listed 5 days ago. Foreclosure. Sold "as is". Bring all offers".  I called my husband at work and he picked up the phone, which is rare. I asked him if he was sitting at his computer and he said yes. I told him to type in the address. Five seconds passed and all I heard was "Oh. My. Gosh!" And then he said, "Call the Realtor!" 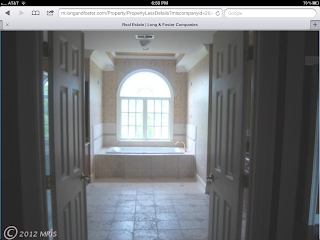 Master Bath﻿
I wish that I could say that everything worked easily from that point but it wouldn't be true. It took over a month just to agree on the price. (They were kidding when they said to bring all offers.)We were tested every inch of the way. From a MIA listing agent who apparently couldn't care less about selling a house, an unscrupulous appraiser who needed an attitude adjustment, and doors that just wouldn't seem to stay locked, to a long list of insurance companies who didn't want to insure the place, we really had to decide, over and over, that we did, indeed, want the house. I was so sure we weren't actually going to close, that the settlement seemed anticlimactic. We drove up to the house, OUR house with a bottle of champagne and I said, "Wow, is this really ours???" 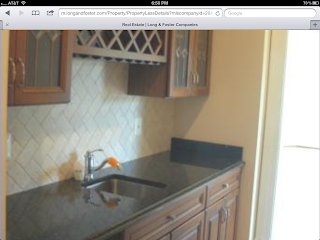 Butler's pantry﻿
I hope to show you over the coming months the progress we are making on our Dream Castle. The person who warned me on the Court House steps that the place had been stripped was half right. Some of it had been. There was no big beautiful stove, and very few of it's many chandeliers left. Odd things like toilet paper holders, a medicine cabinet and speakers from the sound system were missing. But there were two Viking wall ovens, a Subzero refrigerator, a home gym and a wine cellar left intact. 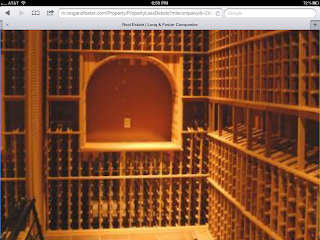 Wine cellar intact. Gorgeous iron door is on the floor. 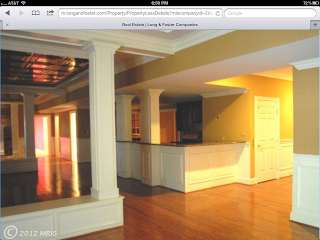 This is the party side of the basement!﻿
I have learned that making a dream come true is like any act of creation. Wishing and hoping is only the beginning. Believing it is going to happen is necessary. Rolling up you sleeves and putting in the effort is what makes the dream a reality.
I can hardly wait for 2013 to get here. Let the dreaming begin!
Posted by Toni at 2:52 PM No comments: