If I Were in Paris 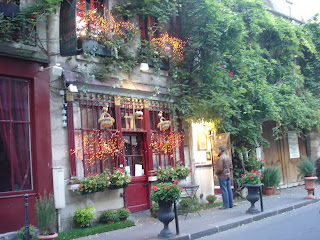 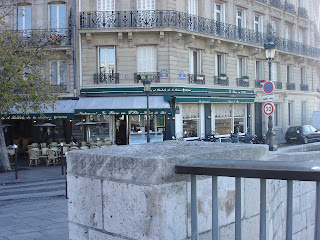 I entered a contest recently to go to Paris for a week and attend Maison & Objet, which is the international home furnishings trade show. It is huge. The company giving away the trip manufactures drapery hardware and they were looking for someone to blog for them every day and in return they would pay ALL the expenses. I was so excited to enter and even received an email from one of the company owners saying mine was the "best entry so far!" I was already brushing up on my French - which is to say, practicing the 20 words I know. Then reality took hold and I was told that due to the fact that they had received several good entries so far, they were going to take them and put them in a hat and draw one name. You may have already guessed that I did not win. But if I had, I would just be finishing my fabulous, all expenses paid trip to Paris.
So.....if I were in Paris today I would have gotten up early and walked over to my favorite (my only!) spot for breakfast, the cafe Le Flore en L'ile, on the Ile St. Louis. If you sit in the back booth you can look across a short bridge at Notre Dame. I would have had my usual cafe au lait and a chocolate croissant. Then I suppose I would have raced back to the hotel and joined my group heading off to Maison & Objet. Supposedly, the displays there are very avant garde with a fascinating array of all kinds of products for the home. Of course I would be especially taken with the fabrics, my favorite component of interior design. No doubt the show would take all day, with just a short break for lunch. But if there was still time, I would hop on the Metro up to Montmartre to take in the view of the Eiffel Tower way down across the Seine. We would all need to stop to catch our breath with a little red wine and perhaps some bread and cheese. After posting my blog, (which was the reason for the trip after all!) I think I would finally be able to talk someone into going to dinner at that beautiful little restaurant around the corner from Notre Dame - the one with the sparkling lights and all the plants around the outside. Then off to bed - or perhaps, a ride on the Bateaux Mouches first for old times sake.
Posted by Toni at 7:04 PM