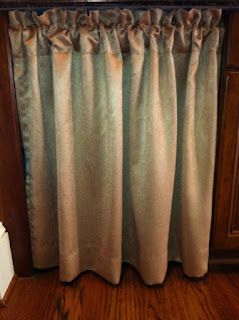 There are a lot of holes in this house. Holes where speakers used to be. Holes where control panels used to be. A hole where there used to be a medicine cabinet. Holes in the ceiling where the roof leaked. Holes where doorknobs used to be. (that is the oddest one, I think. Who takes doorknobs with them?)
There was a very large hole where there used to be a very large stove. So we had to purchase a new stove to fill that one if we ever wanted to eat dinner - or scrambled eggs - again. There were also holes where dishwashers went. The kitchen had 2 dishwashers and the downstairs bar had one. I was lucky enough to buy a stove that came with a free dishwasher and there was one left behind so I only need to get one, eventually for the bar. There were 3 holes where there used to be wine coolers. One in the butler's pantry, one in the master bedroom and one down in the bar.  Those holes in particular were driving me crazy because they ruined the pretty look and also, I had filled each one with junk or boxes. (The butler's pantry hole housed my tool box and drill -- very handy for my constant repairs but boy, what an eyesore). 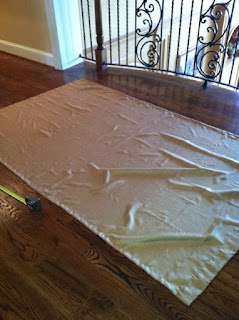 I scored big last week at Bed Bath & Beyond. I found a lined curtain panel for $9.99 that I intended to use as a shower curtain. When I got it home I found that it wasn't wide enough but it WAS the perfect color. So I decided to make a cafe curtain to cover the hole in the butler's pantry. My idea was to cut the bottom off and hem it to size, using the existing rod pocket and header (which forms the top ruffle) with a tension rod. No sewing maching and no drilling required.
Here you can see just how unattractive some ready made curtains really are. Wrinkly! You have GOT to iron those things if you are going to use them. Also I told a designer friend I was using my upstairs landing as a cutting table. She was spray painting a chandelier, bead by bead, at the time. She said, "Oh the things we do for ourselves that we would never do for clients!" 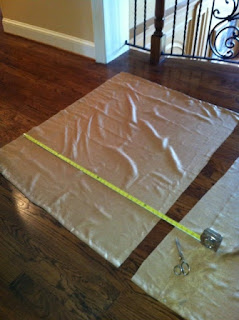 Once I cut the piece off I realized I had enough for another curtain. This time I flipped it upside down and used the hem as a rodpocket and just hand sewed the hem at the bottom. 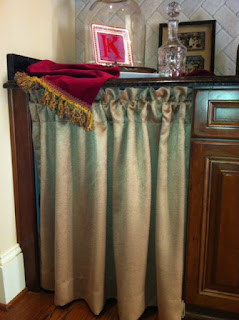 This is the finished curtain (ironed!!) in the butler's pantry.My tool box and drill are hiding behind it. 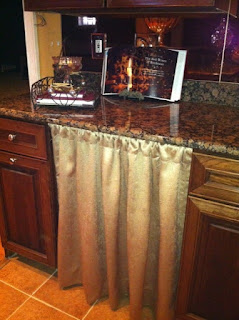 This is the downstairs bar. Home of a future dishwasher.

If you've been doing the math, it means I got 2 curtain panels for $5.00 each. While they are not as nice a fabric as I would normally choose, they are certainly the most cost effective solution I could have for something that is most definitly going to be replaced within the next 6 months.
Posted by Toni at 11:22 AM