A Little Exploring in VA 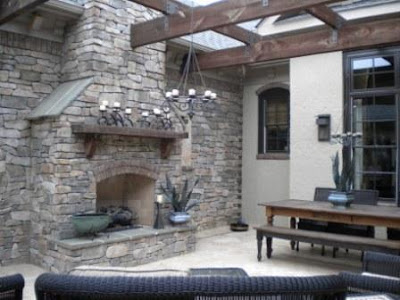 What a great day. Lunch at my favorite restaurant, Can Can, in Richmond. Then we arrived early in Suffolk, VA, too early to head out for dinner so we did a little exploring. We came upon a sign that said "Southern Living Idea House", and of course you have to follow a sign like that. We found the house, but it was closed, and had a For Sale sign out front. But we could tell it was still decorated so we got out to take a look. A detached garage out front formed a courtyard on the front of the house that opened to the driveway on one side and to the covered entryway and the foyer on the other. What a great idea! (It was an Idea House after all!)There were so many things to look at out there. An outdoor fireplace. A copper rainchain. Candeliers - if that is how you spell it. Lots of seating. The only thing missing was a little color, but if you lived there you could put lots of flowers in planters or add some decorative outdoor cushions.
Tomorrow - it's off to be a judge for the Tidewater Builders Assoc. Spring Homearama Critics Choice Awards. Sure to be pictures to share.
Posted by Toni at 10:11 PM No comments:

I Can Have My Cake 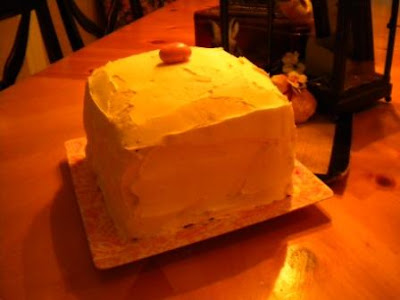 I am a little sad about the demise of so many of my beloved shelter magazines. But I recently ordered a new subscription that has become a bit of an obsession. It is a magazine called "Celebrate" that offers ideas for parties, decorations, themes and recipes based on real and imagined holidays during particular seasons of the year. It is published by the same people who brought back Victoria magazine. (love that one, too.) Anyway, a particular cake appeared in the Spring issue that I could not get out of my mind so I made it the other day. For no particular occasion. Now the rest of the family is obsessed. We are not cake people. On birthdays I will make a cake but after one slice each, it sits around for days. I have never figured out why. But not this glorious cake. We ooohhed and aaahhed over the sheer awesomeness of it's size but I have to tell you, it tastes about a million times better than it looks. Three layers of heaven. It is call Almond Strawberry Cake (strawberry filling between the almond flavored layers). Go to www.hoffmanmedia.com to check out the magazine. It's a party girl's dream.
Posted by Toni at 8:51 PM 1 comment: