There is an incredible swatch floating around the studio with peacocks on it.  It has one of the largest pattern repeats I have ever seen (40" vertical, and 54" horizontal!!) 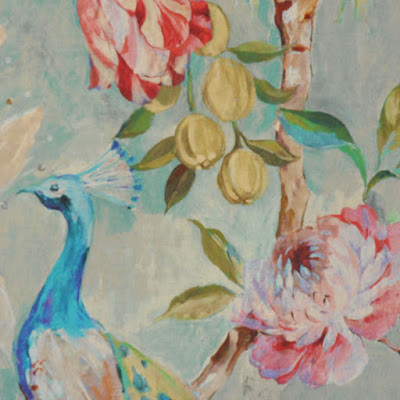 That's the one from the RM Coco website.
Here's the picture of the swatch in the studio: 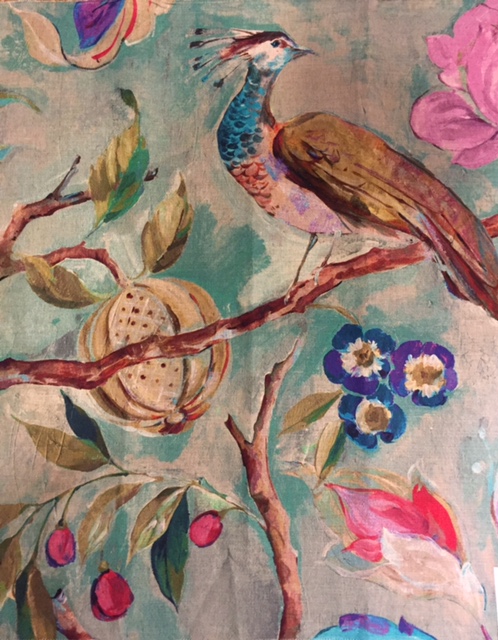 So you see, you get two peacocks for the price of one!!
(Wouldn't this be amazing upholstered to the back of a chair!)
Posted by Toni at 2:07 PM 1 comment:

Gold!!
From the sublime to the ridiculous! 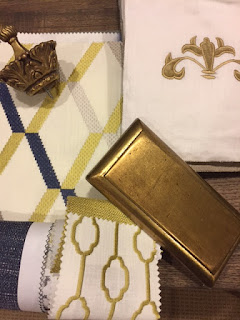 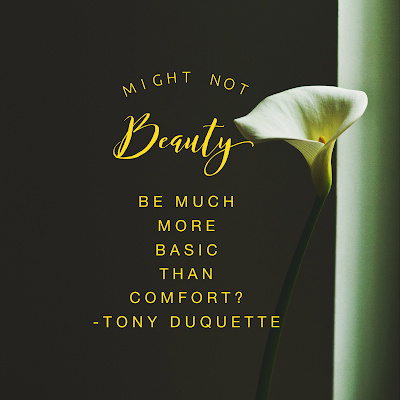 What a great day yesterday! I attended an event for designers at The Sweetwood Collection and Valerianne, where we had lunch and caught up with friends. 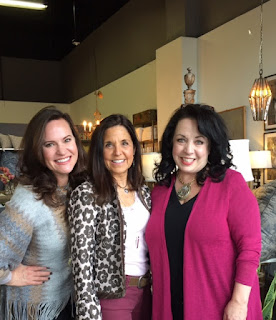 This is a beautiful spot for shopping.  The girls, Stephanie and Denise, from The Sweetwood Collection, are the ones to see if you are looking for unique finds, accessories, art and repurposed antiques. 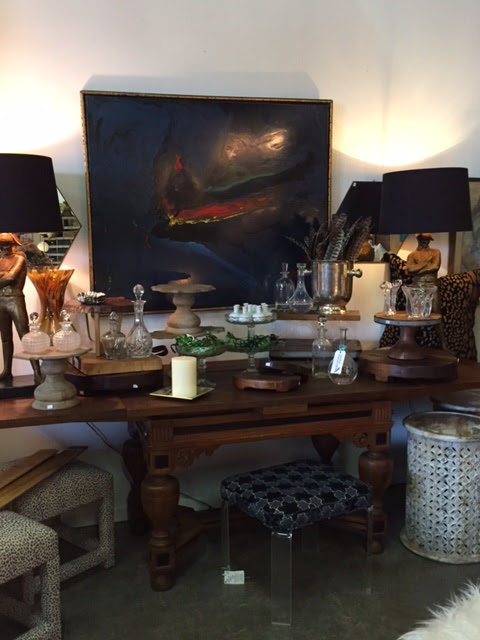 Aimee, from Valerianne, carries gorgeous high-end bedding and other textiles. 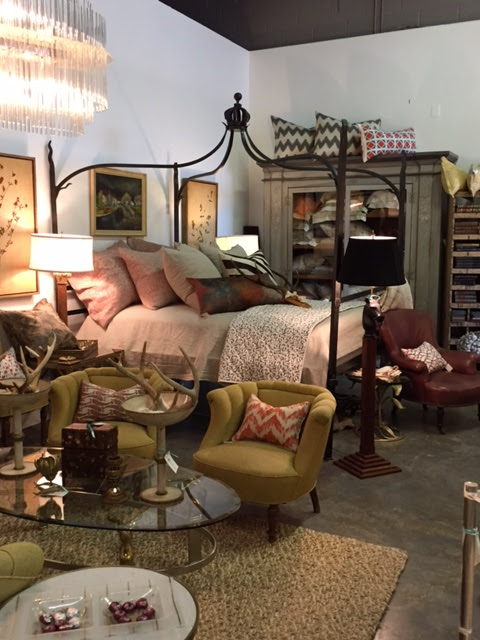 When I got home, I removed the bow from my little giveaway, and it landed right on a paint swatch on my desk.  It looked so pretty there.  It made me smile. Sort of life imitating art. 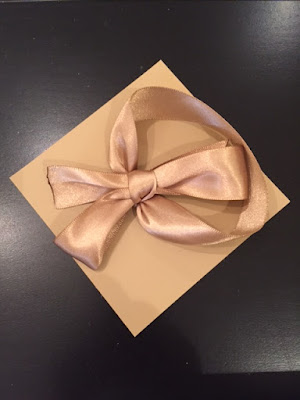 Then I noticed that it looked good with a citrine stone that my son had given me for Christmas and told me to keep on the corner of my desk to attract prosperity! 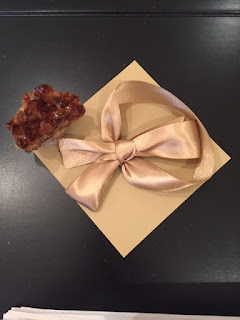 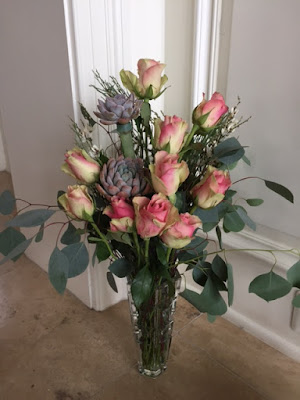 This bit of divine lusciousness showed up today without a card. The box says these were fresh from "the farm" . They came wrapped in brown paper! I love the addition of succulents, the loose branches, the barely there color, the unstudied look.
but who sent them?

Text to my daughter, Skylar:
Me:  Did you guys (Skylar and her brothers) send me flowers? Because there is no card.
Sky:  Yes! There should've been a card that talked about how pretty your are, but oh well
Me:  Wait! I found the card, but it doesn't mention my looks or anything.....
Sky:  It's implied.
Me:  I knew that.

Happy Valentine's Day to you and those you love!
Posted by Toni at 3:06 PM No comments:

The font of this poem looks like it has been outside in today's high winds - all whipped and wispy. 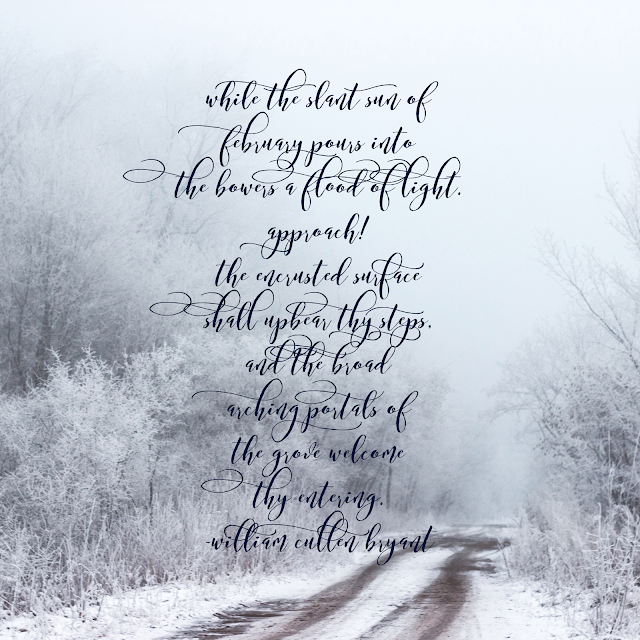 "While the slant sun of February pours into the bowers a flood of light.  Approach! The encrusted surface shall upbear thy steps, and the broad arching portals of the grove
Welcome thy entering."
- - William Cullen Bryant
Posted by Toni at 7:48 PM 1 comment:

Just like you, probably, I love Pinterest as a way to save ideas for future projects (and for the funny pet photos).
My "Windows" board is a place for me to file away great window treatment ideas for myself and for clients. I have over 3000 pins on that board, so I guess that makes me just the slightest bit obsessed.
This photo caught my eye: 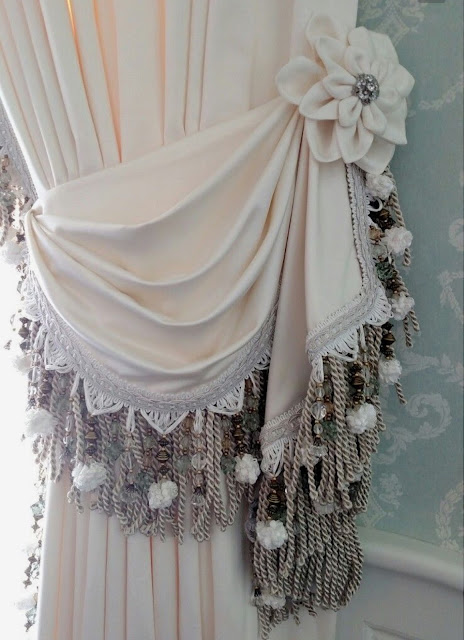 Something I've never seen before: a swagged tieback on a drapery panel.  Very fancy and what an opportunity to use multiple kinds of trim! I count at least three!  Oooooo, and that beautiful rosette.  I miss the days of employing so much detail and really expressing your artistry.  Now it's just plain drapery panels and Roman shades. Let's hope the tides turn soon (and they usually due) and we see a return to touches of luxury in our homes.
Pinterest credits this photo to Donna Hovis Interiors.  I'd like to meet Donna Hovis.  I bet she's a doll!
Posted by Toni at 7:34 PM No comments: 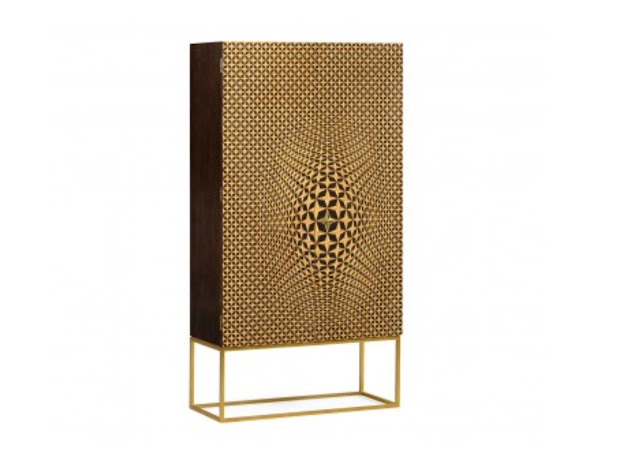 Isn't this cabinet with inlaid stars from Jonathan Charles amazing?
My rep told me (and I hope I remember this correctly) that it takes 7 men 7 days just to lay out the stars.  Each star has 8 pieces to it. Can you imagine? 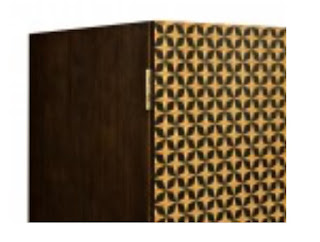 This closeup isn't great because I took it from their website.
As if the beauty of this piece isn't enough, there is another reason why you want this cabinet - 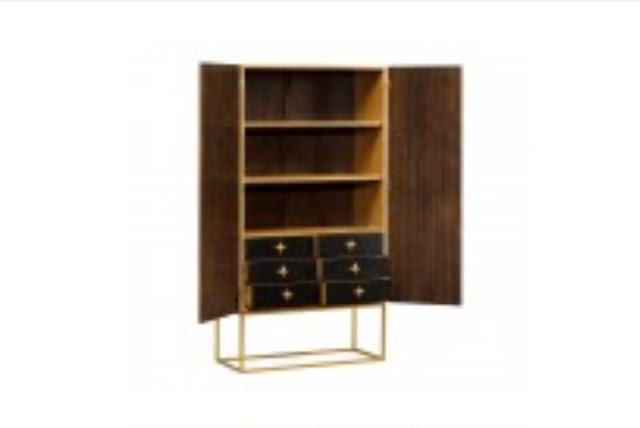 Use it as a bar or anywhere you want a little storage with style!
See lots more stellar goodness at  Jonathan Charles
Posted by Toni at 1:50 PM No comments:

....is another girl's treasure! 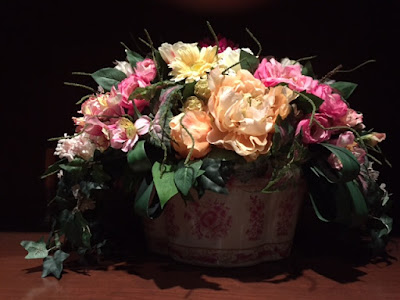 While sitting in our library last night, sipping wine and waiting for dinner to be ready, I was struck by the beauty of this floral arrangement in the semi-dark room.
The container was sitting on my friend's garage floor. "I'm throwing that out," she said. "You can have it if you want it". I drove seven hours with it between my feet.
So glad it has a new life! 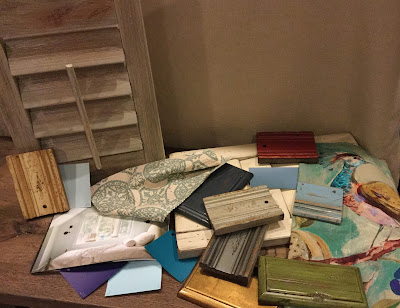 Although it looks like we are mixing it up in the studio again, we are actually searching for a finish for a custom furniture piece.  And then it hit us! We could recolor our driftwood shutter to match (or mix!)
These are the most amazing shutters - available in any color your little heart can dream of! And made in Virginia. We love that.

Which color would you choose?
Posted by Toni at 2:43 PM No comments:

Mixing it up in the studio today 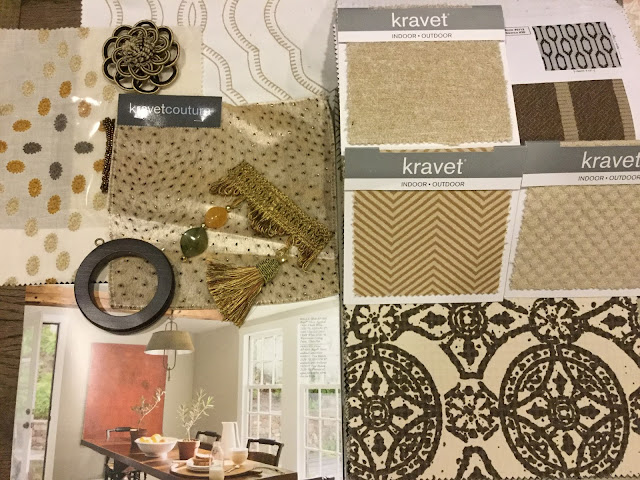 fabrics by Kravet and Kasmir
Posted by Toni at 2:48 PM No comments:

What Every Girl Needs for a Football Game

There are two things you will need for the game tonight: 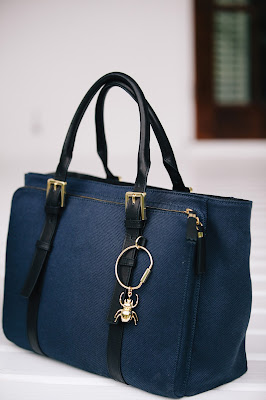 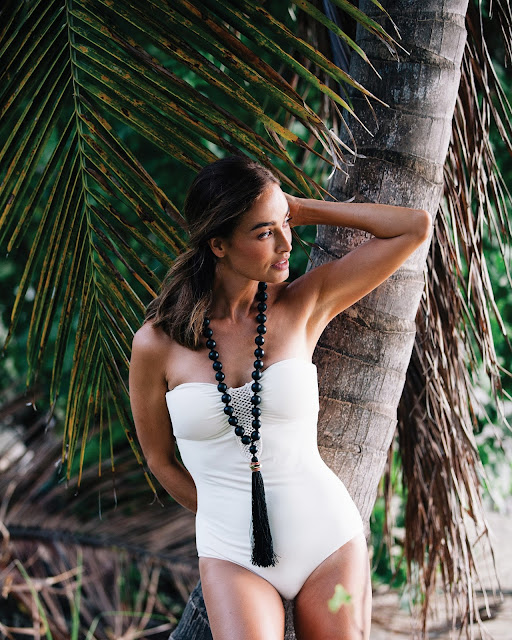 A Komboloi necklace. The beads were originally designed to aid in the saying of prayers (can I get a Hail Mary?!) or just to help you chill, like worry beads.
Anyway, good luck to you and your favorite team.

Check out the rest of the India Hicks products designed to make you look and feel SUPER this SUNDAY.

Friday night was full of nice surprises.
Stone Tower Winery, here in Loudoun County, Virginia, had it's wine pick up night for Tower Cru Club Members.  They promised a couple of food trucks and music by Gary Smallwood, but they WAY over-delivered in terms of ambience and fun!  Every room of the large facility was full of people enjoying wine and having a good time.  It was a really cold night, so it was surprising to see so many people willing to drive to Leesburg. 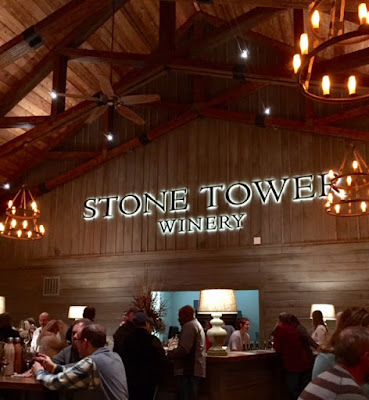 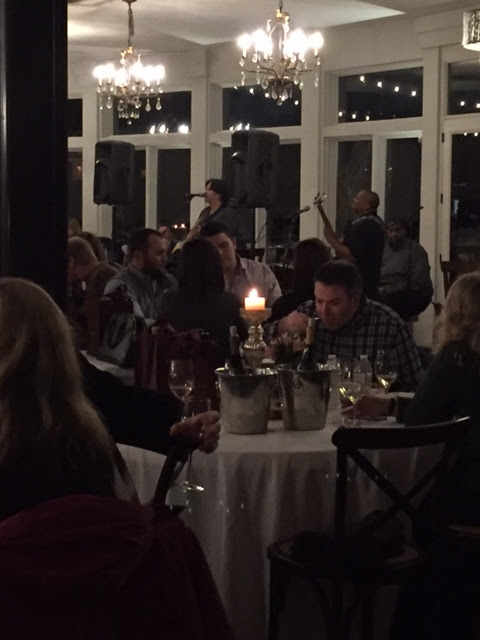 We met some really friendly people while we listened to Gary Smallwood! 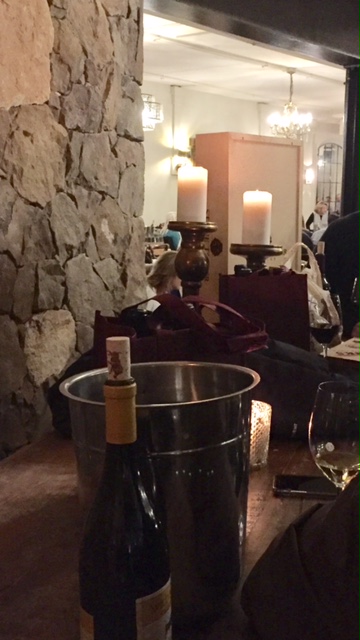 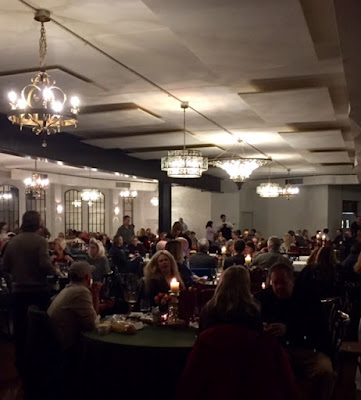 Remember the throw swags of the 80's and 90's?  If you ever tried it, you quickly realized that you couldn't make one long piece of fabric dip and dive and swag and come out even like you wanted.  If you were successful it was because you used an entire box of pins, AND velcro, AND a glue gun AND there was a lot of swearing involved.
I learned quickly that you could fake the whole look, and actually improve it, if all the sides of the window were treated with separate pieces.  It is SO much easier to control this way!
Today we started with a blank window. We added a cordless honeycomb shade for light control and privacy. 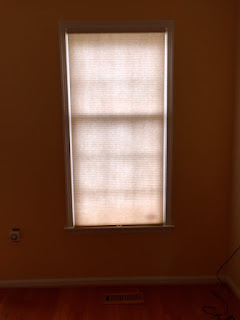 Prepare yourself - the rest of the pictures are just about this dark.  I sent a phone in to do a camera's job!
Since this was a traditional living room, we went with a slightly more formal pole swag to mimic the style that looks like it's just been "thrown" over the rod. The three pieces we used were a rodpocket panel, a pole swag and a double cascade on a tack strip. We chose a wood rod so we could staple the swag and the cascade to it. 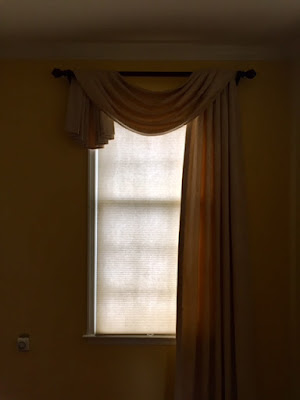 Wonder why it's asymmetric? It's because it's one of a pair! 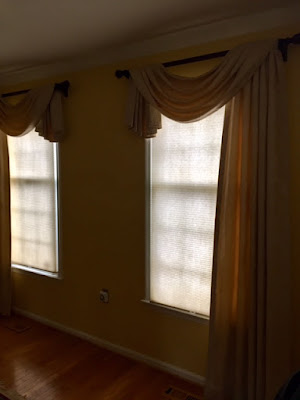 And here's the look with the blind raised: 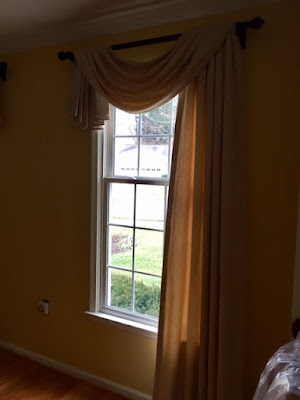 All this - and NO swearing!

Seeing as it's Groundhog Day AND #TBT, I'm tempted to reuse a quote from the past.  But I'm a creative person and I do not like to repeat myself, so here is a new one. 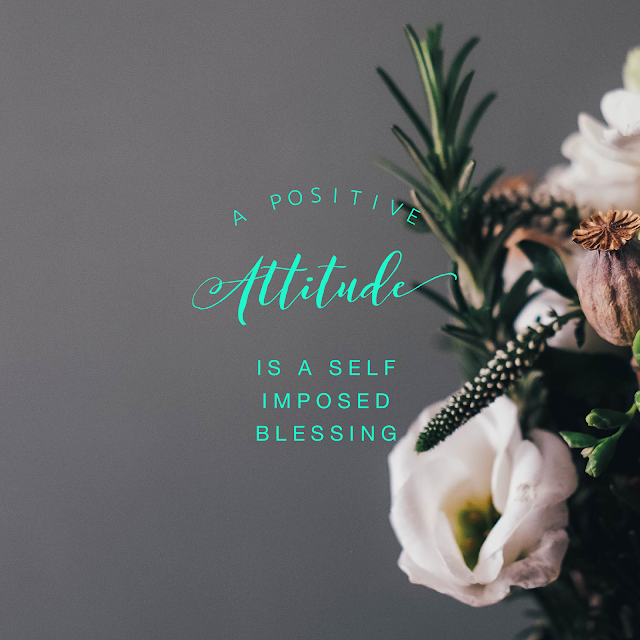 What's your pattern threshold?
It's a question I ask a lot. It really means; How much of a mix of patterns can you have in your space without making your eyes go crazy?
Some people have such a low threshold that they don't care for ANY pattern.  They want everything to be solid.  Others, like me, have a "Too much is not enough" attitude.  I once had a kitchen that was a mix of NINE different patterns.  I loved it!
There are times when you have such a brilliant focal point, like a great piece of artwork, that you want everything subtle around it, so it can shine like the star that it is.
Here's an example of how I like to mix it up.  My India Hicks tropical leaf scarf paired with a totally different print sweater. Trying to mix my seasons!! 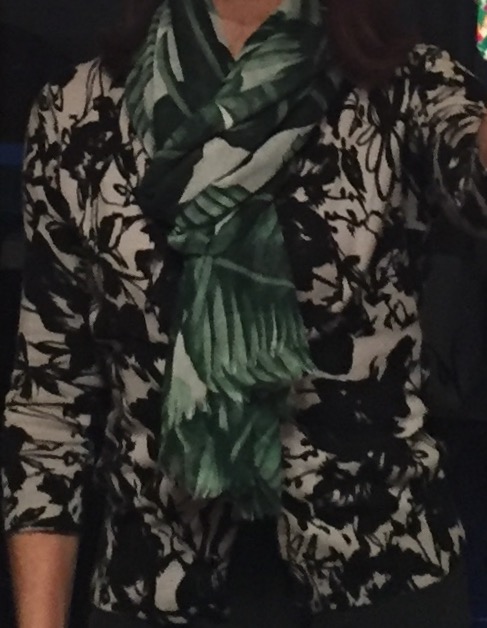 What do you think? Would you wear this combination?
This scarf, with all it's shades of green, looks great with a plain white T-shirt or a little black dress. No one will force you to wear it with another pattern!  You can buy it at India Hicks.