Just in time for a long winter's nap

To say that this bedroom was a continuous work in progress would be a slight understatement. It was more like a journey. My client is very thoughtful about her design decisions, not like me - I like to shoot first, ask questions later. But I have to admit that her approach lends itself to fewer mistakes.
First she had the room painted a neutral color, with the little surprise of a pale blue ceiling. Then we added the Lee Jofa wallpaper with it's subtle shimmer of metallic, behind the bed. It stayed like that for several months. 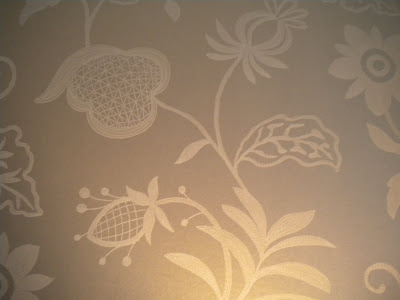 Next came the fabulous headboard with it's polished nickel nailheads, upholstered in a Kravet sueded fabric (you'd call it Ultrasuede; I don't know if Kravet brands it that way). My client found the sumptuous bedding out there in retail land. But she didn't buy the matching bedskirt, which was smart since we opted to make a custom bedskirt out of the Kravet fabric to match the headboard. So far, so fabulous 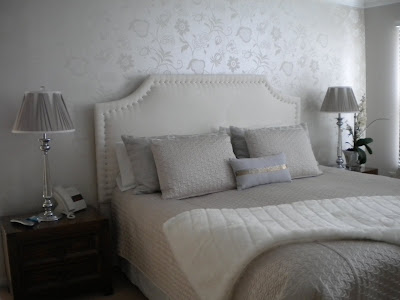 Along the way, she had an old lingerie chest refinished in a silver blue. It almost has a lacquer finish. I believe she changed the hardware (handles) on the chest. 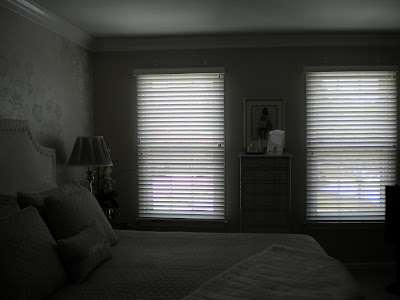 During this time - which you are realizing by now, was AWHILE, we went back and forth about the window treatments. Did we want minimal? - full blown out? - super chic? - super subtle? - what? We decided that this room was starting to go in the direction of Hollywood Glam, but was much more zen-y. My client loves her bling, but she was doing a good job of controlling herself. She opted to err on the zen side, making this a cozy retreat with some glamorous touches. We ended up with a wall-to-wall drapery treatment hung from a simple brushed nickel rod. Since the spaces between the walls and the windows are all different, these panels are hand drawn, with the help of some hidden batons. They are also blackout lined for complete decompression!
There are a couple more additions to be made in the way of a new dresser, new TV and reupholstering a chair, but for now, this room is ready for a much needed nap. Go ahead - SNOW! 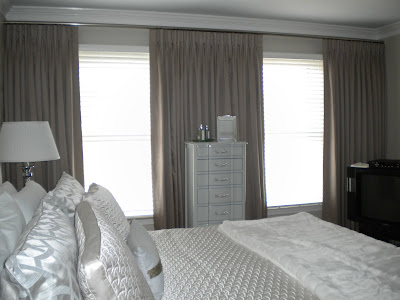 In Memory of Toby 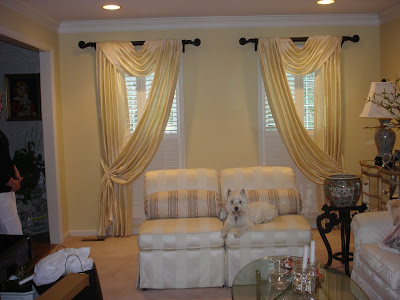 One of my best little friends, Toby died yesterday. He would have been 14 next week.

All kinds of people can change your life, but sometimes a dog can do it too.
I was never much of a "doggie person" and neither was anyone in my family. But Toby was the pet of one of my clients, a client who's been around since about 1997 - so I have gotten to know this client as a friend, and Toby as a faithful assistant. (I realized as I wrote that date, that I guess I have know Toby almost from the beginning.)

My daughter really started pushing for a dog when she was 12 or 13. Toby's owner helped me see what a wonderful pet a Westie can be. She even told me about a store where her friend had found Westie puppies (which can be very hard to come by). Off we went for a look, and the rest is history.

Toby was the kind of Westie you see in TV commercials: well behaved, clean shaven, adorable and practically human. He liked to cuddle up with his owner and watch Oprah in the afternoon. He apparently also liked to sleep on her head. He was more of an indoor dog, whereas, my Westie, Clarence thinks he is a Black Lab. He's always a bit dusty around the edges and is always barking at people and animals outside and telling them to behave. Everyone in my family is a "doggie person" now. We can't imagine what we did before Clarence.

I just saw Toby last week, when I was installing his owner's bedroom curtains. I'll show pictures of that later. Here he is posing with the new living room drapes we put in a couple of years ago. Perfect as usual - Toby, I mean.
Posted by Toni at 3:36 PM No comments: 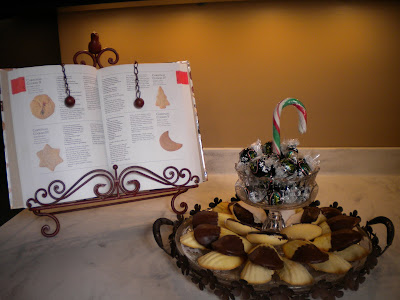 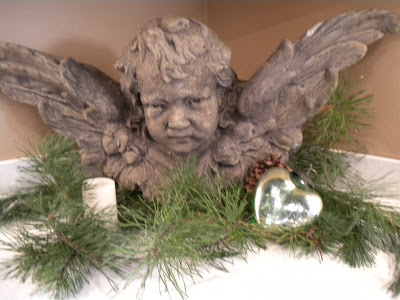 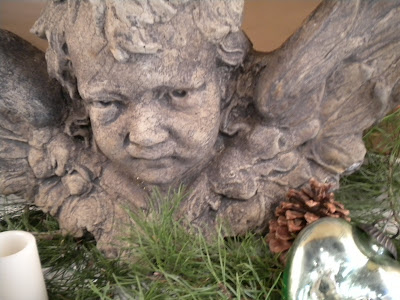 Apparently, I am a deadline kind of girl. I get a whole lot more done when I'm under the gun. Two weeks ago I was offered the challenge to decorate one of the kitchen vignettes at a local cabinet showroom, Kleppinger Design Group in Fairfax, VA. They were going to invite the public to an open house. Now, I don't know about you, but I barely have time to get my own holiday decorating done, much less someone else's. But this was fun! I chose a vignette with black cabinetry just to see what I could do with it. I didn't have to choose a theme but I did, just for myself, to keep me on track. My theme was "The Humble and the Holy" which I thought was pretty appropriate for Christmas, which is the holiday I chose (so did everyone else, but Bonnie, who did Thanksgiving). A lot of designers use the term "High/Low" to mean they are using the plain with the fancy. I have always called it "The Humble and the Holy". Humble would be the rough linen napkins, or the rustic tree wrapped in burlap. Holy would be the $150/yard silk I used for the table runner.
OK so my camera misbehaved and I only have a couple of pictures today to tempt you. I will take more when I go back to clean it up. Plus, a professional photographer was going to photograph it yesterday. His shots will definitely put mine to shame anyway. Here's a taste of the beautiful (though MAD looking!) cherub I used, plus some of the treats at the reception.
Posted by Toni at 12:09 PM No comments:

Can you stand one more post about Homearama? I promise lots of fun things are coming up, because I have been busy on so many fun projects. So sit back and get inspired by some interesting window treatment ideas.